Will you chip in $5 to elect Democrats in Massachusetts?

BOSTON – Massachusetts Democratic Party Chair Gus Bickford released the following statement calling for a thorough, independent investigation into Steve Wynn’s donations to Governor Baker, in light of the letter released by the Massachusetts Gaming Commission today regarding the legality of the donation:

“The Gaming Commission’s statement is deliberately misleading and demonstrably false. The facts are that Wynn’s gaming license did not receive final approval until after the November 2014 election. Wynn’s donation to the Republican Governors Association was funneled to Charlie Baker in October.

“Furthermore, Wynn Resorts did not pay the Massachusetts gaming license fee until November 6, 2014, the day that he received final approval and two days after Baker’s election to the Governor’s office.[1]

“It is clear that the Commission is unwilling or unable to conduct a thorough and unbiased review of all the facts regarding Steve Wynn’s gaming license. They are obviously ducking their obligation to investigate an illegal contribution to the Governor’s campaign.

“It is time for an independent investigation.” 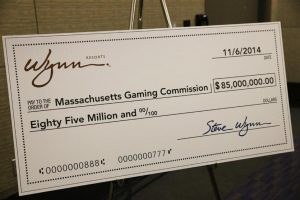 Massachusetts Drops from #1 to #8 Because of Baker’s Mismanagement

Add Your Name to Our List!
Take Action Register to vote Donate now